We have a new winner for the Teacher Who Doesn't Get It Award. It seems that a middle school teacher in Northeast Texas issued a Ghetto Award (8th Annual!!!) to a special education student who expressed confusion in class. On how many different levels is this wrong?

Here is a photo of the Certificate; judge for yourself: 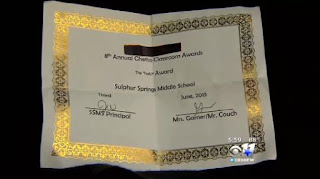 Here is a news article on the mess in the Houston Chronicle.  Here is a Huffington Post story on this debacle.

Oh and did I mention that the kid is an African American? So the double whammy rule is applicable; pretty insensitive, no?

And this also brings up the related issue of disproportionality. African American students end up in special education a lot more than Caucasian kids.  This has been a concern of the U S Department of Education. See, Request for Information (USDOE 6/14/14)   The U S Department of Education published a request for information in the Federal Register  seeking public comment on the steps it should take to address disproportionality based upon race and ethnicity in special education.  You can review the Federal Register posting here;  Dear Colleague Letter 114 LRP 42907 (OCR 10/1/14) OCR noted the widespread racial disparity in access to educational opportunity across the country and reminded school districts of their obligations under Title VI of the Civil Rights Act of 1964 which prohibits both intentional discrimination and disparate impact.
NOTE: African American kids with or without disabilities also tend to get disciplined more than Caucasian kids.  According to the Office for Civil Rights, African-American students without disabilities are more than three times as likely as their white peers without disabilities to be expelled or suspended. Although African-American students represent 15% of students in the CRDC, they make up 35% of students suspended once, 44% of those suspended more than once, and 36% of students expelled. Further, over 50% of students who were involved in school-related arrests or referred to law enforcement are Hispanic or African-American. See, Dear Colleague Letter 114 LRP 1091 (US DOE & DOJ 1/8/14)  The United States Departments of Education and Justice issued policy guidance for school districts and states to reduce unlawful discrimination in student discipline policies.  This seems to be a conscious decision by the Administration to attack the school-to-prison pipeline problem. Although the thrust of the guidance is obviously to reduce racial discrimination in school discipline, the Dear Colleague letter notes specifically that the contents of the guidance also fully apply to discipline that discriminates against children with disabilities and other protected groups.  (See footnote 4 on pages 2-3 of the Dear Colleague Letter).  You can read the DOE blog article here.  You can review the video by Secretary Duncan and the complete guidance package here. The Dear Colleague Letter is available here.

Note also that the mere fact that a significantly higher proportion of African American students are eligible for special ed is not in itself unlawful discrimination. For example, the Third Circuit recently held that a school district properly followed IDEA by individually evaluating students for special education. The fact that black students were classified as eligible for SpEd at a rate 5.7% to 6.6% higher than white students was not evidence of race discrimination.  Blunt v Lower Merion Sch Dist 767 F.3d 247, 64 IDELR 32 (3d Cir 9/12/14)

The problem of disporportionality is a serious issue in special education.  It needs to be addressed. What are your thoughts?

This Special Education Law Blog is intended for educational purposes only. Nothing said in the posts, comments or elsewhere in this blog should be construed as legal advice. If you have a dispute or any other legal problem, you should confer with an attorney who is licensed to practice law in your state. Any reference or description of individuals that resembles actual persons or any reference to what appears to be personally identifiable information is purely coincidental and unintentional. All comments, posts or other discussion should be accepted in the spirit of philosophical debate rather than as instruction or advice of any kind. Any abusive, profane, offensive or defamatory language of any kind is strictly prohibited and will not be tolerated.
Disclosure Policy(FTC) (effective 05/23/2014)
This blog is a personal and business blog written and edited by Jim Gerl. For questions about this blog, please contact jimgerl@gmail.com. Since January 1, 2017, this blog accepts paid advertising, sponsorship and/or paid insertions. I write for my own purposes and also for exposure of my business. However, it is possible that I may be influenced by my background, occupation, religion, political affiliation or experience.
Since January 1, 2017, the owner of this blog receives compensation from advertisers. This blog may contain content which could present a conflict of interest; such content will be identified in the post in which it occurs.